Mandarin Chinese is very different from English. You may have heard that it is impossible to learn and that there are far too many characters to master. There will be some struggles, certainly, but the potential difficulties can be overcome with proper guidance. Let’s take a closer look.

Chinese Grammar is Simpler Than English

As a native English speaker, you may have forgotten all the irregular verbs, spelling rules, and idiosyncrasies of the English. In contrast, the Chinese language does not have different verb forms for first versus third person, or singular versus plural. There are also not hundreds of irregular past tense verbs to memorize, unlike English. Also, if you already know English sentence structures, you will find that many of the simpler sentence forms in Chinese are in the same order. For instance, “I like milk.” in follows the same format as in English:  “我（I）喜欢 (like) 牛奶(milk).” Both sentences have a subject, a verb, and  object. English speakers can quickly master simple sentences and have conversations about daily life. With more effort studying the differences in grammar and structure, learners can bridge any grammar gaps.

Chinese Pronunciation is Not Impossible

If you’re a native speaker of English, you’ll find several sounds in Chinese that don’t occur in your own language, so they can be very challenging to say at first. However, you can find English words that create similar sounds: The sound “zh” in words like 直接 (zhíjiē), is not commonly seen in English, but is pronounced like the “ge” at the end of “arrange”. Also, the X sound in 谢谢 (xièxiè) is almost the same as the “sh” in words like “share”. Your “ear” for the sounds will develop over time, and you will soon find that even the new sounds can be pronounced accurately. Practicing with a native speaker is an excellent way to learn, because you can watch their mouth and listen for the sound at the same time.

There are Patterns in the Characters

Trying to memorize all the characters you will need to read a Chinese newspaper would certainly be a daunting task. How do Chinese people do it, you may wonder. Here’s a little secret: just like many English words are comprised of prefixes and suffixes, all characters are made up of the same collection of elements, known as radicals. Once you’re familiar with a few categories, they stop looking so strange and begin to make sense. For example, the character for people, 众 consists of three 人, which is the character for person. Looking at the character like a picture, you may even be able to imagine a small group of people. Also, the character for grass, 草, and flower, 花 both have this radical: 艹, which indicates that they plants, or made from plants. By learning a few common radicals, Chinese characters will seem less mysterious and overwhelming.

Chinese Learning Can Be Fun

At Lingo Bus, we believe that language study should be enjoyable. Our lessons and study materials are filled with lovely games, songs, and animations to make learning come alive. Unlike traditional drilling methods, we focus on engaging students in active speaking and movement, and use advanced technology to keep kids excited for each lesson. Also, each class only lasts 25 minutes, so students won’t lose focus. There are tons of preview and review materials to help students prepare and to help solidify learning after class. 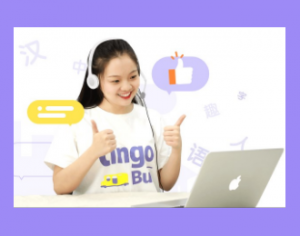 Don’t give up learning Chinese before you try! It’s an exciting language to learn. Unlock a new adventure on Lingo Bus today!